Shortly after the end of the Civil War, with industrialization gaining momentum in the United States and new construction sprouting up everywhere, there was an increasing need for better ways to test the materials used in machinery, in buildings, and elsewhere. Engineers decried the lack of reliable information on the properties of materials. “The art of construction….is involved in mystery and obscurity,” noted Van Nostrand’s Engineering Magazine. “The knowledge of materials is at present….absolutely empirical….Before the constructor makes use of either a new material, or an old one in a new form, the only safe method is to experiment.” 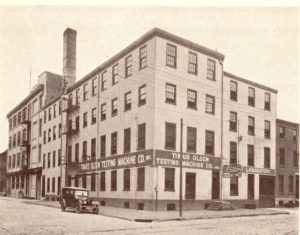 Without some means of testing the strength of materials before their use, however, these experimental results were likely to take the form of explosions or building collapses. From the 1850’s on, various devices for testing materials had been developed, but the goal of a truly universal testing machine proved elusive until 1880, when Philadelphia engineer Tinius Olsen, a Norwegian immigrant who had just lost his job, devised and patented what became known as the Little Giant. Here at last was a machine for tensile, transverse, and compression testing united in a single instrument. Olsen’s mechanism was to become the ancestor of all testing machines subsequently produced around the world, while the company Olsen set up to market his invention continues in the testing machine business to this day. This year Tinius Olsen Inc. celebrates its 125th year of continuous operations. 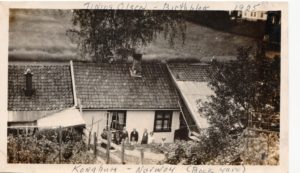 Olsen was born in Kongsberg, Norway, in 1845, one of eight children of a maker of wooden gun stocks. He graduated from the Horten Technical School in 1866 at the head of his class, and became the foreman of the machine department at a large naval machine shop. Olsen did not enjoy this job, and after trying to find work in Newcastle England, left for America. The 24 year old Olsen arrived in Philadelphia in August 1869 and found employment with William Sellers and Co as a designer.

Olsen started attending Sunday Bible classes at the local Lutheran church, where he met the Riehlés, two young brothers who were proprietors of a small scale-making workshop. The Riehlés had received an urgent request for a machine to test the strength of boiler plate. No such device existed at the time, and weak plate materials caused frequent boiler explosions, especially on steam boats that were traveling up and down the Mississippi. The brothers asked him to produce engineering drawings for such an instrument, and in his spare time Olsen designed and drew precise plans for the first boiler-plate tensile testing machine, with a capacity of 40,000 lbf. 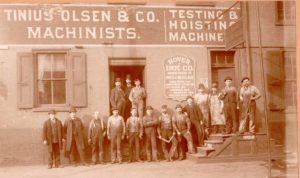 The new device, manufactured by the Riehlé brothers, proved a success, and soon there was a demand for a much larger model. Olsen was invited to take over the workshop, becoming director of the Riehlés plant in 1872. In eight years there he helped establish the firm as a manufacturer of both springs and testing machines. His pioneering contributions to the emerging field of materials testing included vertical and horizontal machines for materials used in bridge construction, locomotive boilers and other industrial goods. Several of these machines were exhibited at the Philadelphia Centennial Exposition of 1876. The patents remained in the hands of his employers.

All this inventiveness did not go unnoticed. In 1879, the Committee on Science and the Arts of the Franklin Institute, Philadelphia’s prestigious center for scientific study and information, appointed a subcommittee to look into Olsen’s testing machines. According to the committee’s report, the machines were “convenient to operate, properly proportioned and handsomely designed, and accurate withal.” Perhaps it was such kudos that prompted Olsen to ask the Riehlés to make him a partner. They refused, and in late 1879 he was informed that his services would terminate at the end of the year.

The First Name in Materials Testing 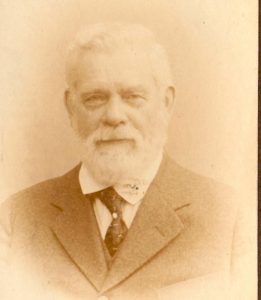 All this inventiveness did not go unnoticed. In 1879, the Committee on Science and the Arts of the Franklin Institute, Philadelphia’s prestigious center for scientific study and information, appointed a subcommittee to look into Olsen’s testing machines. According to the committee’s report, the machines were “convenient to operate, properly proportioned and handsomely designed, and accurate withal.” Perhaps it was such kudos that prompted Olsen to ask the Riehlés to make him a partner. They refused, and in late 1879 he was informed that his services would terminate at the end of the year.
Olsen was full of ideas for a revolutionary device: a universal testing machine. With the support of his wife, Charlotta, one of the first Scandanavian-American women to earn a degree in medicine, he set about making the drawings for his new machine. On Feb 6th 1880, Olsen submitted an application for a patent a ‘new and useful improvement in testing machines” and patent no. 228,214 was granted on June 1st, 1880.

In those days, most tests of materials required separate machines, each dedicated to a single testing function. Olsen’s machine, which he named the Little Giant, could accurately perform tensile, transverse, and compression tests in one instrument, housed in a single frame. The device was compact, simple to operate and it was not expensive.

In his patent application, Olsen explained that testing machines previously had difficulty the pressure on the sample or wasted most of the applied power in friction. He proposed to build the weighing levers to be more compact, decrease the power absorbed by friction, provide an automatic motion for the weight on the beam, and provide a “sensitive measuring apparatus for measuring the distortion of the specimen, as well as an apparatus for graphically recording and illustrating the same distortion.”

The Little Giant was a vertical model; the forces were applied to the specimen to be tested from above and below. Upper and lower loading crossheads contained grips which held the specimen and crushed it, or pulled it apart as the operator turned a handle attached to a system of gears. 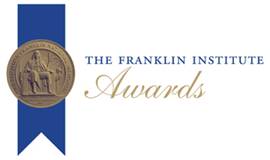 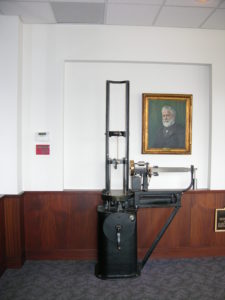 Olsen’s new ideas were not limited to his load frame design. His loading and weighing systems were also improvements over previous practice. His system of screws and gears could apply controlled forces to the test specimen, and his weighing levers greatly reduced space requirements. As an optional attachment, an electric motor could be used to move the weight, or poise, on the beam automatically, without the operator being required to touch it at all.

In addition to greater precision, the Little Giant provided a graphic record of its measurements. Rubber cushions and springs provided damage protection, thus obviating what had been a troublesome problem – testing machines were often damaged when a specimen broke. With all these innovations, Olsen’s device has been called the basis of all testing machines.

When an established Philadelphia firm declined to take on the new product, Olsen’s wife talked him into going into business for himself. The two of them had little capital – only a few thousand dollars – but he managed to establish his workshop, Tinius Olsen & Co., at 500N 12th Street in Philadelphia. Soon he was taking business away from his old employers, the Riehlé brothers.

Although Olsen refused to go into debt, his wife was so determined to see the machine exhibited, she pawned her diamond rings to raise the cash to send the Little Giant to industrial expositions in Cincinnati and Atlanta in 1881. The machine won gold medals at both shows. By the next year Olsen had an order for the first 200,000 lbf testing machine ever made and, as an example of his diversity, he also built a machine to test the tensile strength of feathers.

Olsen continued to make innovations in the testing machine field for decades thereafter. In 1891 the Franklin Institute awarded him the Elliot Cresson Gold Medal for his autographic testing machine, which generated a permanent, easily interpreted record of stress-strain results. In 1908 the federal government ordered a 10 million pound capacity machine, which remained the largest testing machine in the world until the middle of the century.

Other honors, including a medal from the king of Norway, came his way over the years. Olsen retired from the company in 1929 and died in 1933. The company that he started in 1880, now in its 133rd year of operation, is still run by his descendants – now in the fifth generation – and still continues to provide innovative solutions to testing problems.